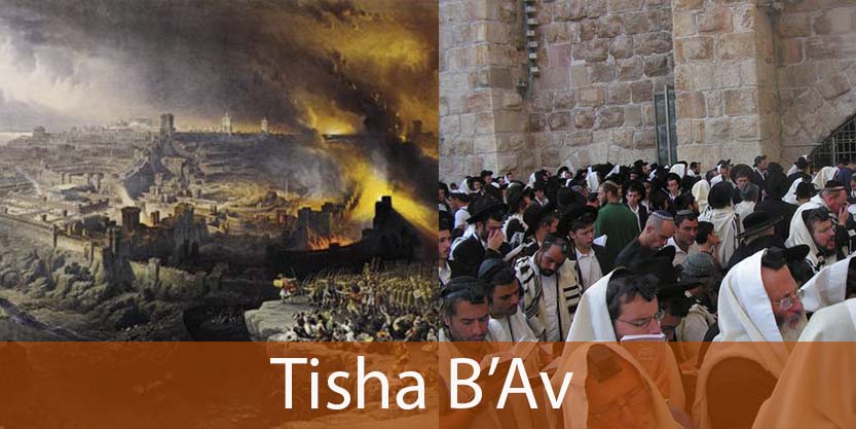 The fast commemorates the destruction of the First and Second temples in Jerusalem which occurred about 656 years apart, but on the same date. Accordingly, ‘Tisha B’Av’ has been called the "saddest day in Jewish history".

According to Jewish writings, ‘Tisha B’Av’ actually commemorates five events:
1.    The twelve spies sent by Moses to observe the land of Canaan returned from their mission. Two of the scouts, Joshua and Caleb, brought a positive report, but the others spoke disparagingly about the land which caused the Children of Israel to cry, panic and despair of ever entering the "Promised Land". For this, their punishment from G-D was that their generation would not enter the land. Because of the Israelites' lack of faith, G-D decreed that for all generations this date would become one of crying and misfortune for their descendants, the Jewish people. The account of this is found in the bible in the book of Numbers, chapters 13–14
2.    The First Temple built by King Solomon as well as the Southern Kingdom of Judah were destroyed by the Babylonians led by Nebuchadnezzar in 586 BCE and the Judeans were sent into the Babylonian exile.
3.    The Second Temple was destroyed by the Romans in 70 CE, scattering the people of Judea and commencing the Jewish exile from the Holy Land.
4.    Simon Bar Kochba’s revolt against Rome failed in 135 CE. Bar Kochba was killed, and the city of Betar was destroyed.
5.    Following the Roman siege of Jerusalem, the razing of Jerusalem occurred the next year.
According to the ‘Talmud’, the destruction of the Second Temple began on the ninth of ‘Av’ and was finally consumed by the flames the next day on the Tenth of ‘Av’.

The ‘Tisha B'Av’ fast lasts about 25 hours, beginning at sunset on the eve of ‘Tisha B'Av’ and ending at nightfall the next day. In addition, mourning customs similar to those applicable to the ‘shiva’ period (seven days of mourning) immediately following the death of a close relative are traditionally followed for at least part of the day, including sitting on low stools, refraining from work, and not greeting others.

Other calamities associated with ‘Tisha B'Av’ are:

On a visit to Israel, my wife and I were in Jerusalem on ‘Tisha B’Av’. We were in the Jewish Quarter of Jerusalem near the Dung Gate (which is the entrance to the 'Wailing Wall') and we observed hundreds of Jews hurriedly walking to the Wailing Wall to begin ‘Tisha B’Av’.

Suddenly I began to weep as I saw the earnestness with which these devout Jews were walking to the Wailing Wall; hoping to please G-D.
I realized that there was nothing they could do to please G-D except receive the gift of salvation offered through Yeshua. I also realized that this would not happen unless someone would inform them that Yeshua is the ‘Mashiach’ (Messiah) they were waiting for. This is G-D’S mandate for the church, and this is the mandate of Emet Ministries.

As we think of all the calamities which have befallen the Jewish people over the years during this period of ‘Tisha B’Av’; as our hearts cry out with their hearts over all the atrocities that have befallen the Jewish people throughout the ages, let us continue to pray and trust for their salvation. Let us pray that G-D removes the veil that He has sovereignly placed over the hearts and minds of the Jewish people concerning the Messiahship of Yeshua. Let us pray that G-D will thrust out workers into the Jewish harvest field.
Even more than this, let us take the good news of Yeshua to them ourselves.

My brothers and sisters of the flesh need to hear about their Jewish Messiah, Yeshua, so that they too, can have the chance of salvation, the forgiveness of sin and eternal life in heaven.

My brothers and sisters of the flesh need to hear about their Jewish Messiah, Yeshua, so that they too, can have the chance of salvation, the forgiveness of sin and eternal life in heaven.

We at Emet Ministries stand with and pray for the Jewish people and Israel over this sad time of ‘Tisha B’Av’.